Google Sheets can perform many useful statistical calculations if you use the right functions.

In this tutorial, I will show you how to use the LINEST function in Google Sheets.

What is Linear Regression?

Linear regression is a basic predictive analysis used in statistics.

It is used to look at relationships among variables and tries to predict the value of a variable based on the value of another variable.

Regression is commonly used to try and answer two questions:

The LINEST function calculates different parameters about the ideal linear trend using the least-squares method when given partial data about a linear trend.

The syntax of the function is:

To use LINEST to only return the regression coefficient and the y-intercept, you only need to enter the first two arguments which are the known Y and known X values. 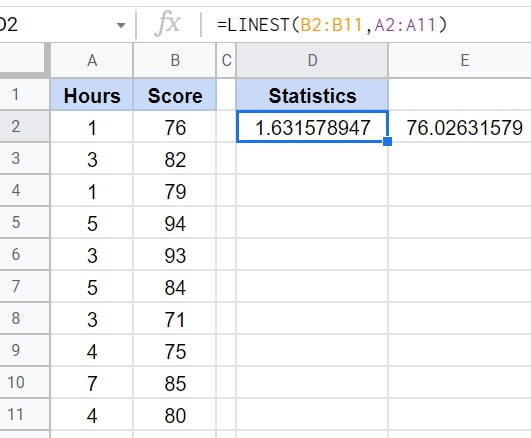 In the above example, I am looking at data that contains test scores in relationship to hours studied.

The formula used in the example is

If you want to return additional statistics with this function you need to set the fourth argument to true.

Here is an example of the function being used to return the additional regression statitics:

In this example my formula is:

The formula returns the following statistics:

Hopefully, by now you have a solid understanding of the LINEST function and how it can be used to quickly provide multiple regression statistics. If you are regularly working with linear regression, then this is a must-know function for you.

It is pretty easy to use once you understand the arguments and the returned values of the function.