The RANK function will return the rank of values in a dataset in Google Sheets.

In this tutorial, I will show you how to use the RANK function in Google Sheets.

The RANK function will take the values in a dataset and return the ranking of them.

The syntax of the RANK function is:

Let’s take a look at an example of how to use the RANK function in a spreadsheet:

The formula used in the above example is:

Since I have left out the is_ascending argument, it is set to 0 by default. This ranks the values in descending order with the largest value in the dataset being number 1.

Here is the formula to change it to ascending order:

Now that I have shown several examples of how to set up this formula, I will show you step by step how to use the RANK function:

1. First, select the cell where you want the returned rank number to appear. In the cell type “=RANK” and press Tab on your keyboard to begin entering the function 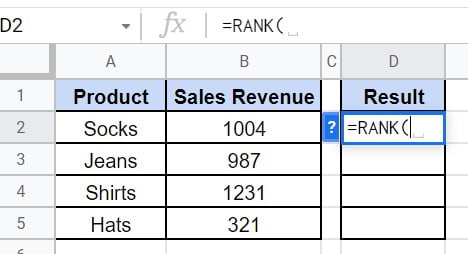 2. Select the cell that you want to rank and add a comma at the end 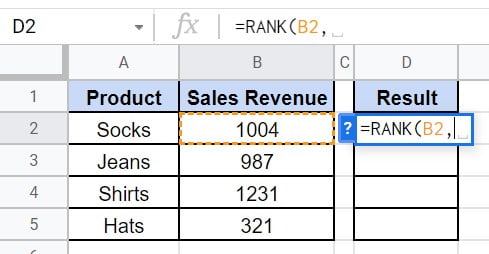 3. Next put in the range of data from which the rank will be determined. After entering the range, press F4 on your keyboard so the values are locked as absolute values. If you want the rank determined in descending order add a closing parenthesis, if you want it ascending order, you need to add another argument and place 1 there

4. Press ENTER on your keyboard and you should see the rank number returned

5. Copy the formula and paste it down additional cells if you want to return the rank for more values

When working with data it can be very useful to know the rank of the values in a dataset. With the RANK function, you can quickly rank a cell or an entire dataset by setting up this quick and easy formula.

The only part that is a little tricky about this formula is remembering the difference between descending and ascending ranking, but after you get that down, it’s a pretty simple one to set up.

More Google Sheets Tutorials:
How to Highlight the Highest Value
How to Use the MAXIFS Function